Joseph Mallord William Turner was born in London on April 23, 1775, and became one of the greatest English artists. In spite of his prolific work, Joseph Mallord William Turner produced exceptional and great works. The source of his insatiable inspiration were ships and water, but throughout his life he was also fascinated by dramatic scenes of nature. Turner's parents, his father was a barber and his mother a butcher's daughter, lived in a flat in Maiden Lane, Covent Garden. Little is known about his mother. When Joseph Mallord William Turner turned 25 years old, she was hospitalized in a mental hospital, where she died four years later. Joseph Mallord William Turner had a very close relationship to his father, who recognized his son's talent and supported him by exhibiting his works in the family's barber shop.
Joseph Mallord William Turner was self-taught, he never trained as an artist but learned quickly and was very talented. At the age of 14, Turner received a scholarship to the Royal Academy and a year later, in 1790, showed his first watercolor in the academy's annual exhibition. The critics and his supporters alike were enthusiastic about the skills of the talented young artist.
Joseph Mallord William Turner received great recognition, but remained withdrawn, taciturn and sometimes even grumpy. He kept his technique a secret in an almost jealous way and kept silent about his private life. At the age of 26 Turner was admitted to the Royal Academy.
Afterwards Turner undertook travels across Great Britain. He captured his experiences in sketches that formed the basis for his watercolors. In 1796 he produced his first oil painting ("Fishermen at Sea") and three years later became an extraordinary member of the Royal Academy. During that time Joseph Mallord William Turner already enjoyed financial independence. He moved out of his parents' house and rented a place in Harley Street. In 1799, Turner visited William Beckford, one of his benefactors, and was so impressed by two paintings by Claude Lorrain, that he was determined to paint large, historical paintings himself.

That year he also undertook his first trip to mainland Europe. His first destination was France, where he wanted to see the pictures exhibited in the Louvre, that had been stolen by Napoléon. In 1804 Joseph Mallord William Turner was financially able to build a gallery onto his house, in which he exhibited his own works. This was a unique constellation in the English art scene of the time. Three years later he became a professor of perspective at the Royal Academy. Meanwhile Turner had become one of the leading English landscape painters alongside John Constable. Many of his works were shown in a second large exhibition in 1819.
That same year Turner's trip to Italy became the trigger for a radical change in his career, he was amazed by the southern light. Within four months he produced over 2000 pencil sketches of Rome and its surroundings. Having returned to England, he began to paint his idea of the power of light. Even though he did not change his style abruptly, he drew a clear line between his commissioned work and his experiments, in which his ideas unfolded fully.
Many of his most famous pictures were created in the last few years of his life, during which Turner retreated ever more from social life, because of his ill health.
Joseph Mallord William Turner died aged 76 on December 19, 1851 in London. He was buried in St. Paul's Cathedral. In his will he left 300 oil paintings and almost 20,000 drawings and watercolors to the English state. He asked for his works to be exhibited in a separate gallery. Most of them can now be seen in the Tate Gallery.
Joseph Mallord William Turner was a pioneer and exponent of Impressionism. 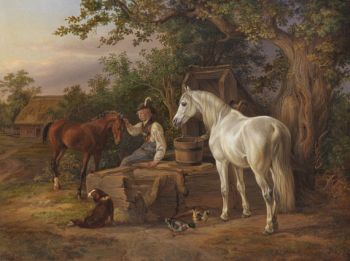 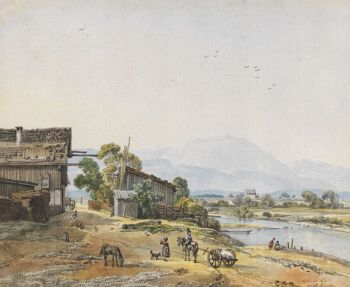